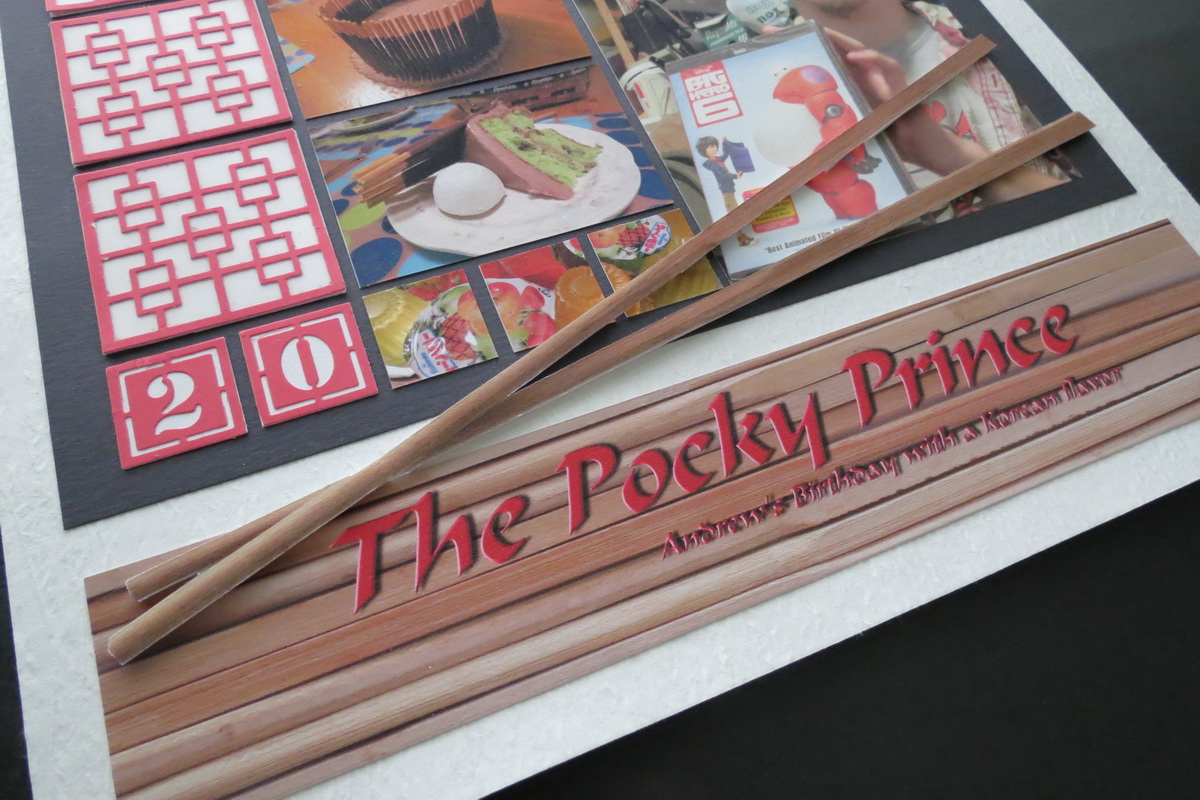 Our nifty little cornerstone dies make doing something special with them easier and economical. For pennies you can crank out as many as you need and in the colors you want!

I’m going to begin with the Beijing cornerstone die as we recently had a birthday for Andrew that I think was a perfect fit for this die.

Some of my children are K-Drama fans. This has led to an unusual interest in the foods of Korea. Unusual as Andrew is not one to try anything ‘strange,’ yet, when it came to choosing his birthday meal this year, it was to be Korean all the way. His cake was to be covered in Pocky. These skinny sticks of biscuits covered in chocolate are his favorite snack and were designated to be the star of his cake. I knew the title should probably focus in some way on that inspiring bite of chocolate. A trip to the Asian market and a willing cook made it a reality. It was time to try something a bit different in this layout too, so one of our 8.5” x 11” black Mosaic grids seemed perfect for a change. The grid was mounted onto the white Wausau textured cardstock in the top center position leaving a nice wide section at the bottom for the title.

Three of the Beijing tiles were cut in red, three squares of vellum and three squares of white cardstock. They were layered together, first the vellum to the cornerstone with dot adhesive and then that section to the white cardstock with a double layer of tiny pop dots to float above the white just a bit. The vellum toned the white cardstock down a bit and was a tip of the hat to shoji screens. They were lined up vertically along the left-hand side of the layout, leaving two 1” blocks at the bottom. Using the Stencil Number Die to cut his # birthday in red with white and then fill those bottom spots.

The remainder of the page was filled with the various foods we enjoyed, and yes, we did use our chopsticks. They really are fascinating tools. I thought it might be the perfect back drop for my title. The chopsticks were lined up by pairs top to bottom and bottom to top and then photographed.

A title and sub-title was decided upon and the photo editing program was used to add them to the photo of the block of sticks. A pair of chopsticks was positioned in a crossed position and another photo was taken. Both were printed on an 8.5” x 11” matte photo page and trimmed to size. The pair of chop sticks was trimmed using an X-Acto knife and metal ruler. To achieve the look of real chopsticks the trimmed sticks were mounted with narrow strips of foam mounting tape. While one Beijing cornerstone tile would have made a nice addition to the page, a full row of them really makes a statement. Why not see what statements you can make when you add these new cornerstone tile dies in our architectural line to your collection!

Be sure to see this pin on our Pinterest Board: