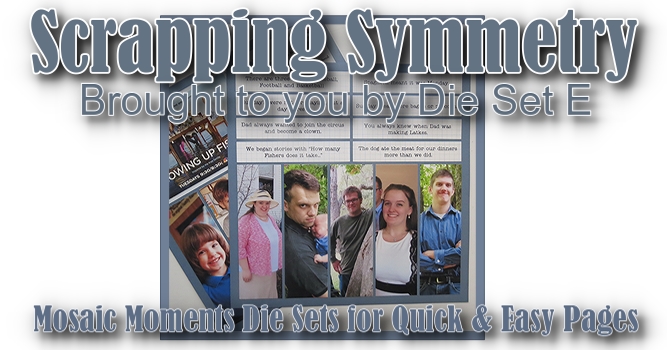 Brought to you by Die Set E We’ll be featuring Die Set E for our Scrapping Symmetry layout today finding inspiration from the Pattern Gallery. Our gallery has many patterns that fall into this category and there is plenty to choose from and keep you busy! The pattern #121 allows for 5-2×6 photos along the bottom and two upper sections of 8 narrow strips. I have used the upper section as word strips for the layout, and photos in the bottom. The pattern is done completely with Die Set E. This is one reason this pattern is so quick and easy! I’ve also done a second page that mimics pattern #121, except that the top portion has been altered to accommodate my scrapping inspiration piece. Let me tell you about a post card I received that has prompted this layout. Last year our family received this post card promoting a new TV series, all because our last name is Fisher. The TV show was called “Growing Up Fisher”. I don’t know how many families across the States were on the list, but it seemed to me to be a fairly unusual thing. The series was short lived, but I managed to catch a couple episodes on Hulu at the time. I think the whole idea was that each family has things that are distinct to their way of growing up…an idea we can all relate to. I always wanted to do something with it, so this became my jumping off point.

What would be the 8 things that my bunch would identify as unique to their growing up days as Fishers? With five of them to ask for 8 items, you would think it would have been easier to do! We whittled down the list of 20 to 8 and then I printed a grid and list on matte photo paper. I used the 1×5 die strip from the Die Set E to cut them apart.

The pattern accommodates five spots and I decided to use a photo of each of my five children on each page, one being while they were young and another with current photos. My page one layout holds the post card and the young Fisher bunch. I thought it important to include the reverse side of the post card and tried a version that split the backside in half and placed on either side. This would have kept it a symmetrical pattern, but it really bothered me so I opted to go with the postcard to one side and the writing on the other side. I loved the stamp that was on it, a “woody”, and I had to include it because I’ve always loved that car!

TIP: Growing up Fisher, it’s a great prompt don’t you think? What better way to scrap a few memories from your childhood, or your children’s childhood that won’t necessarily have photos to match (or maybe they do!) This is a great way to include a few photos of the kids in a then and now, you’ll be amazed at what they do or don’t remember!!

you can find this pinned to our Pinterest Scrapbooking Idea board: