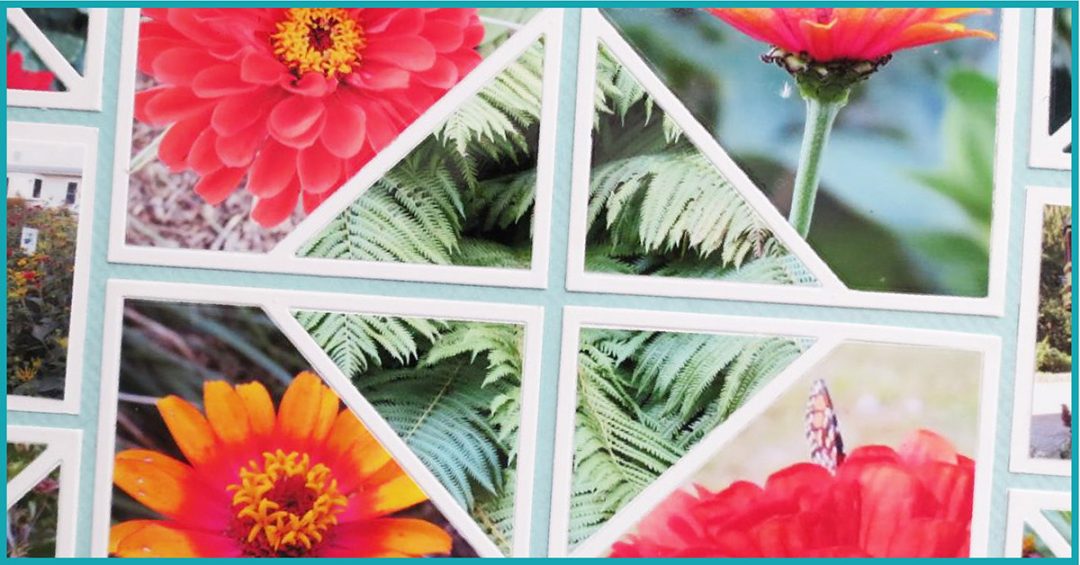 This week a new pattern idea for working with the Diamond Mine Die set took me to a small park at the “end of my street”. Our town has been developing a bike and hiking trail through town connecting it with neighboring communities. Along the way, they have developed this little park that boasts of being a Waystation for Monarch Butterflies. I had to get a look! I wanted to use the bevy of flowers to show off the dies.

I’ve chosen the Mint Grid from the Mosaic Moments Grid Collection, Fresh & Fruity, as the tones of the foliage in the photos showed up nicely on the page. White cardstock for all the die cuts and the four mats for the 2×2’s on each side unifies the page and makes the pattern of diamonds and cross show strongly in this pattern from the Pattern Gallery.

Pattern #392 is a mostly squares pattern. This time I have only used two of the Diamond Mine Dies the 2×2 and 3×3 to complete the layout.

All the photos on the page have been printed as squares on 4×6 photo paper. For the central four photos, I chose four close-ups of single flowers and printed them as 3”x 3” squares. The photo in the bottom right-hand corner is maybe not the most dramatic but, just as I was ready to leave the park, two Monarch Butterflies showed up and began flitting around and I tried desperately to capture an image of one and I did. It’s just a little hard to see it at the angle I was shooting…but I wanted to use anyway.

TIP: The four corner photos were printed as a 4”x 4” squares. Then I cut it into four 2”x 2” squares. By positioning the photo on the die along the inside edge I easily cut the pieces I needed without printing a larger photo.

Initially, I did not plan on using the whole photo; I wanted the outside sections to put in flowers taken of the garden sections overall to get a squared up look with the photos. That way I’d have larger, closer ones in the middle, clusters in the next tier and fields in the last tier. However, I really liked the whole photo so that’s what I went with to fill these four corner spots.

The final section is the center four triangles and I used a picture of some of the ferns with a variety of shades of green, make for a restful spot on an otherwise busy and colorful page. Who knew the flowers at the end of summer could pack such a punch?

The four 2×2 photos on each side are mounted on white 2×2 squares with a border to match all the other die cuts. These are not florals but some of the signage, including a model trolley, a bicycle rack that’s featured here and all around town, and a long look at the Trolley House in the park. If this facility didn’t have limited space for tables, it would make a great place to hold a scrapbook event with the beautiful and peaceful surroundings.

It’s time to start trying some of the new patterns and see how versatile your Diamond Mine Dies can be, who knows what other designs you will discover that you will love?