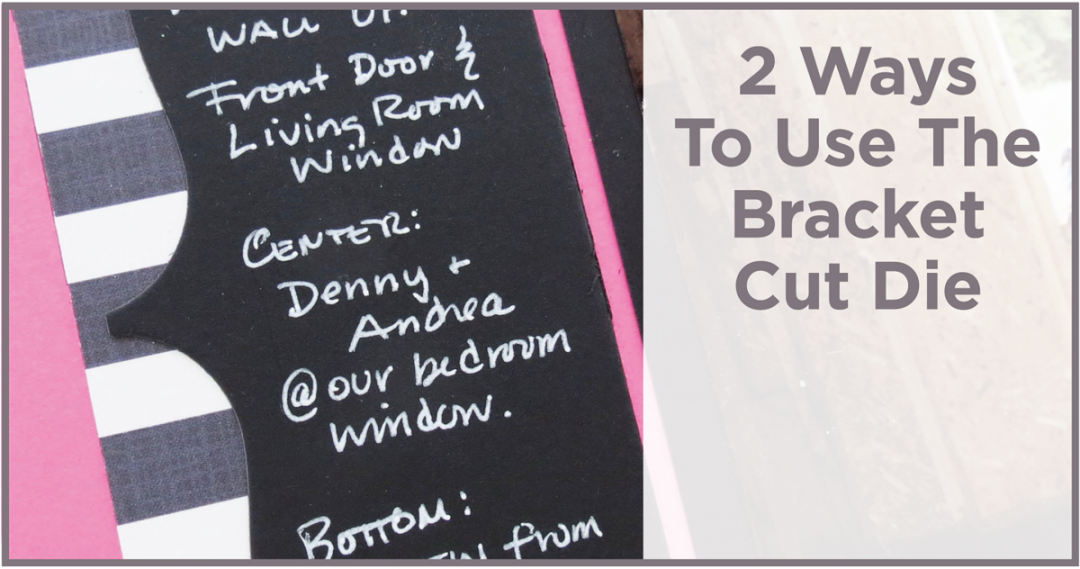 Tell Your Story with the Bracket Cut Die

Beginning with the Die:

The Bracket Cut Die is a 2×4 die and so our patterns that we will be trying to pair will have to have that size in the pattern.

I had to think about how I wanted to use the die.

One of the nice things about this die is that you have two portions that you can use. The smaller portion will fit on a 1×4 strip, but can also finish out any other tile piece that is 4 blocks wide. The larger one will sit on a 2×4 tile and can act as a spot for journaling. It suggested to me a story with this parenthesis to hold the tale. So what story would I use?

Next came The Grid Paper:

I was given Cyclamen grid paper to work with to feature this die. It’s a pretty bold shade of pink and I really had no idea what I was going to do with it. No clue to photos either…and before I could go pairing a pattern I needed more information! I found a patterned paper that I was reserving for a Tell Your Story feature that had a hint of pink in it with black and white pattern. However, it was themed by the pattern words to be a storytelling page. So think of this week as a bonus TYS week!

The paper is Typewriter by PhotoPlay

What story would I tell about our family? Would it be something from Generations ago or something a bit more recent and personal that would mean something to the kids?

I chose to go with the story of our house being built. At the time the youngest had not been born and the oldest was only nine, yes, I think this will be good. But on Pink Grid paper? The only thing pink in any of the photos is Libby’s dress, but yes…I went forward with the plan.

While I took some photos, most of my time on Blitz day was working on the build. Fortunately, we have many photos taken by others and given to us remember the day we began. However, most of the photos were horizontal and 3.5”x 5”in size. There were many to pick and choose from, my pattern search was going to be a challenge!

Now for the patterns:

Here are the top choices I made from the Pattern Gallery.

My first desire was a 4×6 spot flanked with 2×4 spots. There were 4 patterns that did that but there were too many verticals. Two patterns would let me use one bracket and a square, but that didn’t seem to be enough space to write the story and too awkward to trim a photo to fit. Some were just too busy with too many shapes for the series of photos I’d selected. I played around a while with paper tiles and grids to try out each pattern and visualize the results. That’s when I saw that with a little tweaking to a pattern I could get exactly what I wanted for a Title/Journal block and a story/photo feature for the Bracket Cut Die. Here’s the final choice: Bringing it All Together:

I chose to enlarge two of the photos, one with the kids on site at the dedication day and the second of my husband and I later in the day on the day of the build. We’d been posing for photos for the newspapers and they caught many candids too, but this is one of the two of us I like the best.
I had one 3.5” x 5” photo that is used even though it doesn’t fit the 3×5 space. I had to trim away a little on the side to fit, but it still left me with a .5” gap. A partial mat of striped paper showing above and below was my solution and it helped me decide to carry that to the space above and the side. On page two the four building shots show the progression of the build from the first few minutes to early afternoon. It was exceedingly difficult to narrow things down to just a few, but as representative shots of the day’s events I think it works out well.

On page one the smaller black brackets frame out portions of the patterned paper that I fussy cut to get just the right section for the 2×4 spots for the title section. Above and below they complete a panel title. Journaling with Teletype font worked for keeping that newspaper/typewriter theme.

On page two I’ve gone with the strong black & white stripe that is a reverse side of the patterned paper and black & white cardstock mats and journal spots. The black cardstock brackets contain the details on the photos on the page. White gel pen on the black brackets keeps the theme going. I personally would not have chosen to do a construction layout in any shade of pink, much less the bold Cyclamen of this challenge, however, it let me think outside the box to find a useful way to incorporate the Bracket Cut Die, a specific themed patterned paper and then find photos to pull it all together.

Sometimes the most unusual choices will bring surprising results. Search the Gallery to find your inspiration!