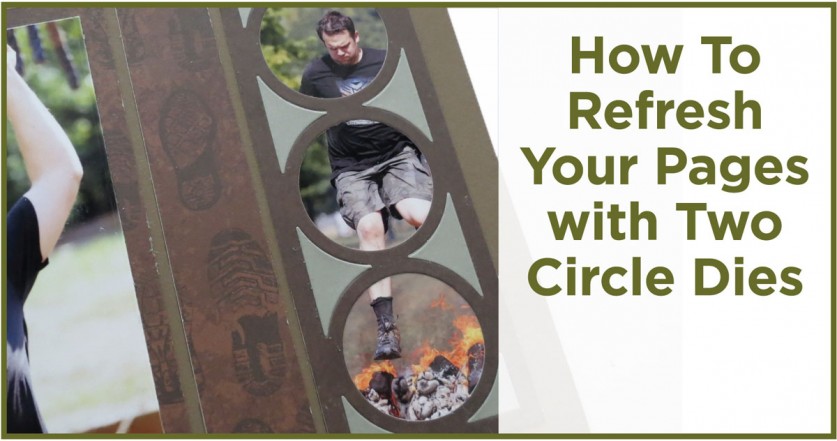 and Mosaic Moments Grid in Sage

This week we’ll give a quick face-lift to Pattern #230 a row pattern using the Three Circles Die and 3×3 Circle Tile. The Sage Grid lends itself well to the outdoor photos of my oldest son’s return to running an obstacle course after breaking his ankle in four places and adding plates and screws to hold him together at the last one.

Mosaic Moments Pattern Refresher Course Pattern #230 before and after

A pattern paper by Moxxie (Got Mud?) caught my eye and when I decided to incorporate it into the page, it became a contributing factor to the page pattern I would choose to use. I began with seven photos from the event. There were three different events with a couple of photos for each. I thought to do a page with a series of photos, but then decided to take the best one from each. I also needed a 2×5 spot for the Three Circles die and either a 3×3 or 2×2 block to include one of the Circle Tiles too. I wanted to use as much of the large mud blob from the page as I could. I discovered I could use it in two pieces in Pattern #230, one section in the large 3×7 block along the bottom of the page and the other at the top 2×7 block.

This was a two sided paper with a footprints pattern that was great mat for one photo and a 1×5 strip between photos. Both dies were cut in the darker brown section of the paper and Pale Olive Paper Tiles back the 3×3 journal square and fill in the sections of the Three Circles Die. I’ve covered the 3×3 block with mesh and let it extend beyond the circle edge and then snipped away the center. With so many rope events in the run I thought it might add an element of interest that hinted at them. The mesh is self-adhesive so it’s easy to use. It’s one of those old embellishments I’ve had stashed away for several years finally finding a good purpose. I’ve used a single photo behind the Three Circle Die and used a Pale Olive Paper Tile to cut the pieces to inset and allow the circles to standout.

The center section of the page showcases my photos. The event logo tops the page and the bottom corner a spot to records the event, date, and place.

I often use pattern paper to fill in spots or serve as mats for photos, but this is one time I chose to use it to fill large spaces as a title. With so many pattern papers out in the market with word art or titles and themes this is one pattern that will help to feature that along with your photos. Nearly the entire paper is used with only a few additional paper tiles as accents so it comes together quickly.

I chose the pattern before looking at the original and was surprised to find it too used pattern paper! This time we’ve incorporated more photos, titles and journal blocks with a strong center photo display.

Why not find ways to use your favorite go-to pattern and find a fresh way to use it.