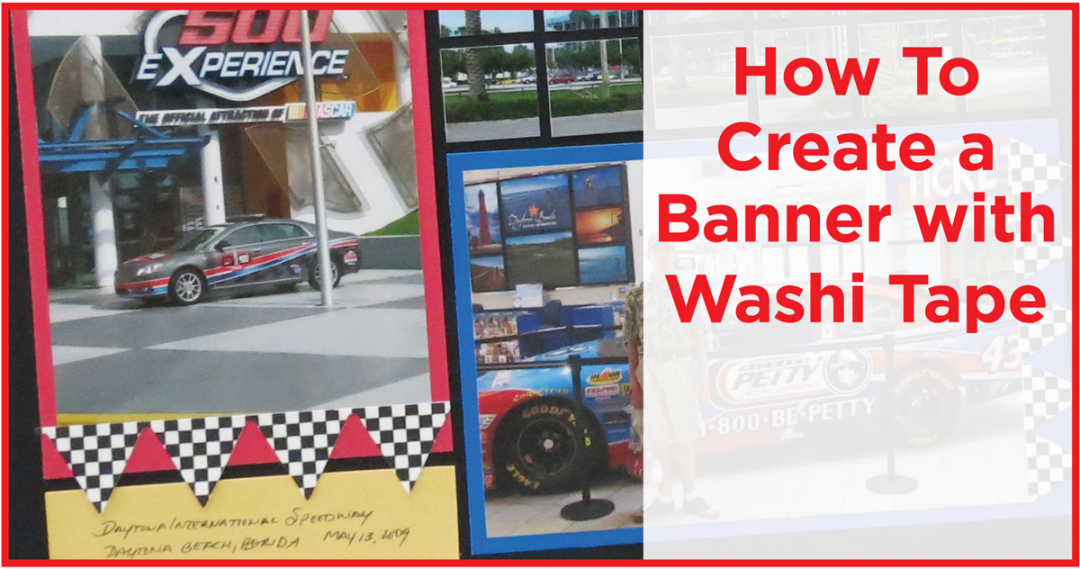 This quick layout features the Banner Borders Die Set and will put the finishing touches on any scrapbook page celebration especially this NASCAR themed page. I’ve used pattern #251 a strip pattern so I could fill the top row of strips with the colors found in the iconic NASCAR logo. Placed on a Mosaic Moments Black grid the colors really pop. In each of the 4×6 block spots I’ve repeated the bold colors from the top strip as mats. A photo of the Daytona International Speedway is cut to fill the mosaic section. A fourth photo has been trimmed to 2” and mounted on black cardstock with a 1/8” border. It is placed in the center-right of the row of strips. With the narrow border it gives the illusion that the base tiles have been trimmed away to set it in, but it is just placed on top. The lower left 1×4 strip is used as a title/journal spot. Now with everything in place it’s time to add the finishing touch with a series of banners. Every racing page should have a checkered flag, right?

TIP & Technique: Use Washi Tape to customize a banner instead of patterned paper. There are so many colors and styles the possibilities are endless! To achieve that I used Black and White Check Washi tape (Little B) on white cardstock and the MM Banner Borders Die Set to cut both the banner and the flags. Quick and Easy! The first banner I added I positioned under the vertical photo and allowed it to drape across the lower tile, I trimmed one flag off, but I will add it in on the upper banners. The individual flags I arranged along the side of the horizontal photo. In both cases this visually minimizes the extra space on the mat from mounting a regular print. Next I wanted to drape a banner across the top and played with it before I decided and then I used the extra flag to extend the banner just past midway. The individual flags here are one to a tile at the bottom of the photo.

No matter the occasion you will find it easy to add a little extra to a page with this versatile die set.